Oldid Silverbeard, steward of Ironhelm at Eastpass, put on his spectacles to better read the script on the parchment. Curious indeed! An anonymous letter in the old hand of Balnorhak and sealed with the seal of Thane Dorrii. He tilted the wick of the oil lamp for better light and read over the words a third time. It explained the recent treachery of the three sisters, and it provided detailed instructions for finding the lair in which Hedvyg concealed herself. It concluded with a stern warning, “Give no ear to her lies! Silence the old hag; cease her crooked lips from moving.”

Silverbeard shook his head in disbelief. “Here in the Principality? After all the years? Well, I shall see to it!” The elderly dwur noble assembled a party of worthies to enter the hidden lair and slay the witch. The adventurers found the halls of Hedvyg, but they did not catch her unprepared. Cruel traps she readied for them, and fearsome monsters she had collected to defend her secret holdings. A certain vampiress of Perrenland gave her command over chilling wraiths and foul necromancies. Hedvyg was ready. Those heroes sent by Oldid Silverbeard never returned, and who can say what became of them?

Hedvyg cast the smoke-raising herb onto the scryer’s pot and called out for her sisters, but they did not answer. She called out for the Yatil Queen, but she received no reply. So I am all alone now, she thought to herself. Now it’s my time. She strode into the dusty halls of her father’s gone and vanished kingdom. Dark-helmed dwarven guards flanked her, granting her the appearance of one to be taken seriously and not trifled with. Undead on loan from Drelnza trailed along in her retinue, striking terror. Hedvyg swept into Eastpass, freezing the blood of all who beheld her and curdling the milk of their cows and their goats while it yet remained in the udders. She declared herself the sole remaining heir to the throne of Balnorhak, the last surviving daughter of the undermountain king. She called upon the houses of Balnorhak to rally to her, and she charged them to cast down the upstart Prince Olinstaad Corond.

END_OF_DOCUMENT_TOKEN_TO_BE_REPLACED

The orcs had a hard time ignoring the ripping talons of the hippogriffs and sharp javelins of their riders, but there came too few of those to stop the advance of the host. From horseback, Fastaal Dothmar rallied the elven line, and he led the charge up the shallows of the Handmaiden. The goblinkind of the first ranks beheld that bright prince in resplendent armor and all those warriors following, their steeds kicking up such a spray of water as to obscure their numbers. This was the doing of Onselvon’s illusory arts. Only a paltry sparse number of warriors followed the charge, but under the powerful illusion spell woven by that great mage, it appeared to the goblins that a mighty host leapt forward from the dawn, silhouetted against the early rising sun just above the mountains. Blinking in terror, the front ranks scarcely had time to draw back before they learned to fear the three blades Defender, Concluder, and Gnoll-Cleaver.

Some unseen dweomermaster dispelled the illusion almost as soon as it had been cast, but the front ranks turned their backs too quickly to discern the truth of the small number that pursued them. The retreating goblins collided then with those who still advanced from behind just as the screeching eagle-horses and their deadly riders in the sky descended upon them again. Confusion and sudden bewilderment spread through the host. The advancing ranks tripped over retreating kobolds and goblins and orcs, and they turned their knives against one another. Three blasts on a heavy horn signaled a halt. Urgush had no choice. He ordered the host to dig in for the fight. They drew up ranks, threw up barricades, dug pits, crawled under rocks, and prepared to huddle down for the day.

END_OF_DOCUMENT_TOKEN_TO_BE_REPLACED

When the snowmelt and winter rains subsided, famished goblinkind came pouring out of their holes, seeking farms to raid and villages to plunder. This time, a surprise met the hungry hordes. The allies occupied every pass in the northern Lortmils, strangling the routes from the Pass of Celene all the way to the Lorridges. Under the earth, Dengar and Gilmorack garrisoned strategic positions on the Low Road, funneling the underground movements of the tribes. Kristryd had arranged it all. In the months prior to the snowmelt, she consulted with the generals and strategic thinkers of the alliance, negotiated troop placements, prepared supply lines, and sketched out contingencies. Once the action began, she played her role as liaison between the forces, moving rapidly back and forth between battlefronts mounted on the back of the great hippogriff Emolasmairim. Elves, dwarves, gnomes, and humans alike watched the sky for the wings of her steed. Field commanders and officers consulted her for information about deployments, supplies, and the movements of the enemy. She found herself providing answers to questions that exceeded the scope of her actual authority, and she did not hesitate to issue commands in the queen’s name when necessary to do so. Why shouldn’t the Queen’s Wrath take charge? Am I not the author of the strategy?

The northern squeeze corralled the tribes together into a wide vale between the Celene Pass and the way to the Luskan Mines. There they remained, bottled up, until Father Furduch arrived with a gnome army from the Kron Hills and Verbobonc. END_OF_DOCUMENT_TOKEN_TO_BE_REPLACED 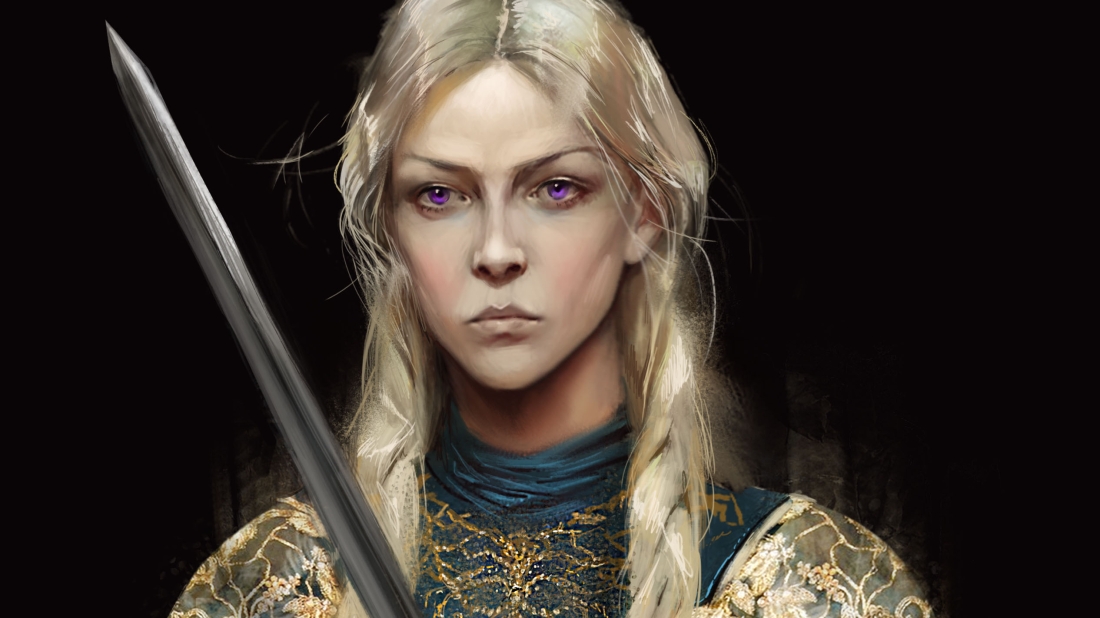 For ten days the elves of Enstad sang mournful chants and recited ancient lays over the tomb of Triserron. On the eleventh day, the Perfect Flower shed her mourner’s garments, immersed herself in the pool of Hanali Celanil, donned a shirt of mithril, and took her seat on the Blossoming Throne. For a full day and a night, she sat silent, staring unseeing, cold-eyed, terrible, and fearsome to behold, and none dared speak nor enter her presence nor take leave of her.

While Enstad mourned the loss, brave deeds transpired beneath the mountains. A warrior called Dothmar, wielder of the great sword Concluder, rose up to avenge the Prince Triserron who was, in fact, his mother’s brother. He considered himself a defender of the balance, but he hated orcs, and he refused to countenance such insult to olven dignity. “Who will follow me into the holes under the mountains?” he asked. END_OF_DOCUMENT_TOKEN_TO_BE_REPLACED 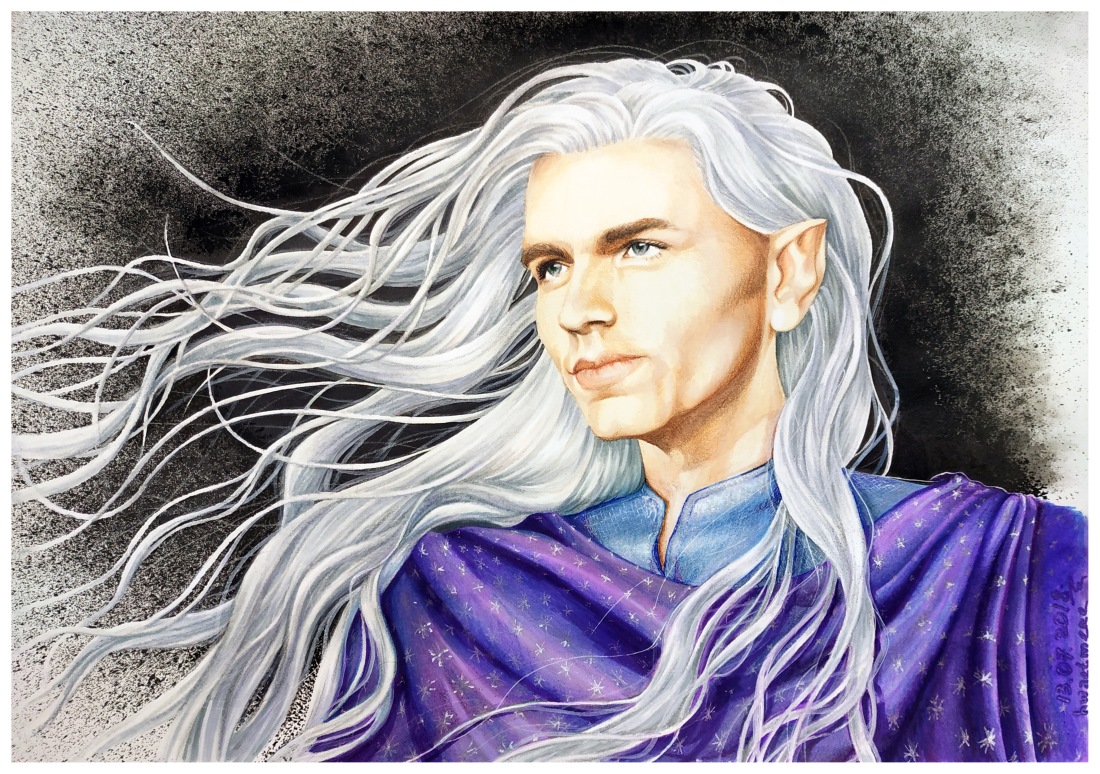 At times the sound of the ethereal voices seemed to draw close, as if the singers stood outside her cottage window, but at other times, the voices sounded far and distant. Kristryd tried to make out the words. The archaic forms were beyond her level of fluency. Nevertheless, the potent enchantments lulled her into trance-like waking dreams in which she seemed to see the characters, the deeds, and the scenes described by the silver voices rising and falling on the night air.

“It is the story of Gruumsh and his wars with the gods,” the old lore master explained. “We’ve been hearing it retold nearly every night.” For the whole ten-day lamentation, the eerie keening melodies of Sehanine’s priestesses kept Kristryd and Bagbag mesmerized, hushed, and reverent.

“You understand the words of their poetry?” Kristryd asked her tutor.

“Nay daughter, not scarcely half of it, but I know the tale as it’s told in Enstad. Not like the version told by our priests. Here in Enstad, gods know, they have their own telling.”

“I would know it if you can tell it,” Kristryd said with a dreamy sigh. Though she could not make out the words, the olven songs stirred her heart with a sad and mournful pining she could neither express nor explain. Some wistful nostalgia in the melody tugged at her. It made her heart melancholy … but wasn’t it a sweet and beautiful sorrow?

Bagbag explained, “The elves of Enstad say their city is the birthplace of their people—the very place where the elven god battled the One-Eyed (may Moradin smite him) and their war came to its grisly conclusion. You know the tale?” END_OF_DOCUMENT_TOKEN_TO_BE_REPLACED 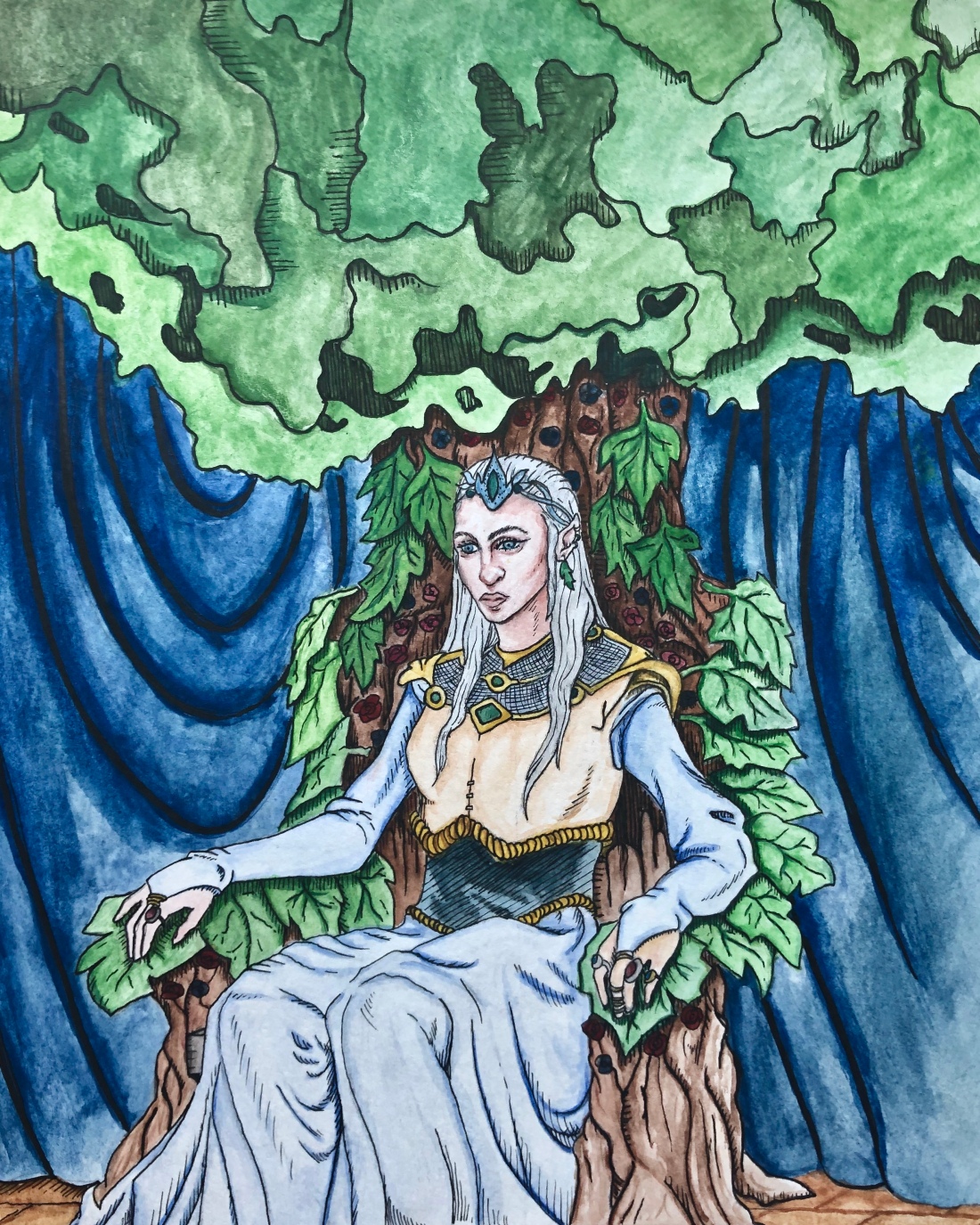 “Here we are,” Bagbag stated matter-of-fact as he and Kristryd and all their retinue crossed over the stone-arch bridge that spanned the splashing Handmaiden. “I’ve not set foot in this place since before you were born, but nothing has changed,” the old wizard observed. He punctuated the observation with a snort and a wrinkling of the nose to indicate his distaste. Still he straightened his sorcerous hat and smoothed his coat as if to make himself more presentable.  Indeed, Bagbag knew that many eyes were now fixed upon their small party, even if those watching remained unseen. The heavy-laden mountain dwarves glanced about fearfully, uncertain of their safety amidst so much fey devilshine. They drew together in a tight clutch and kept their weapons at the ready.

Ignoring the apprehensions of her afterlings, Kristryd breathed deeply to take in the rich scents of the kingdom. Wood smoke from bakers’ ovens carried the sweet and nutty aroma of elf bread on the morning chill. Frankincense, myrrh, and the fragrance of flowers mingled with the peaty scent of the fallen roanwood leaves that carpeted the ground beneath her feet. The princess cocked her head to better fill her ears  with the morning music. The occasional piping of unseen pipers, the gentle strings of lute and dulcimer, and the melodic chirp and trill of songbirds all blended together as if in chorus. In the distance, almost imperceptible, the rising and falling of perfect crystal voices, locked in ethereal harmonies, never ceased. Her eyes too took their fill of delights. The perfect architecture, naturally integrated into the roanwood-covered slopes of the foothills, making it appear as if no one lived there at all. She searched all around for some solid pattern to make sense of the city’s layout, but the whole of it seemed as random as the forest floor. Yet, somehow, she sensed symmetry like the petals of a flower. END_OF_DOCUMENT_TOKEN_TO_BE_REPLACED 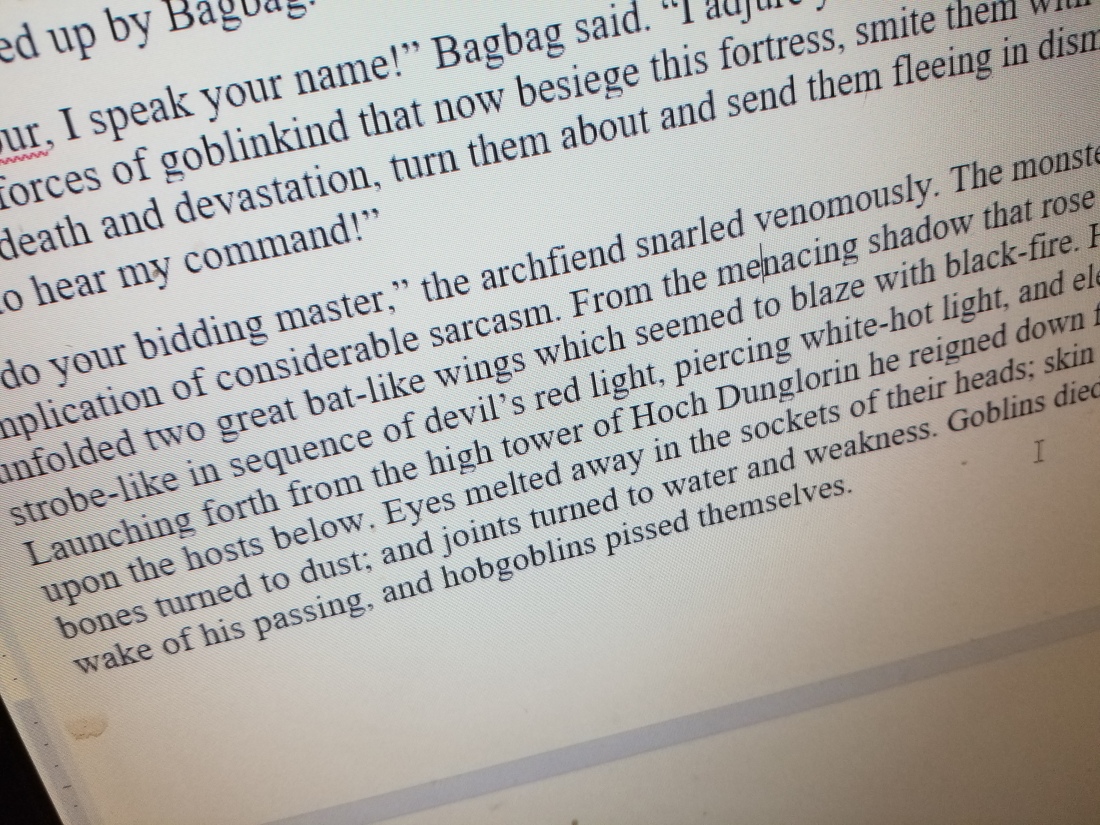