Night Arrant might be the least-read and most-entertaining of Gygax’s Gord the Rogue series of Greyhawk novels. It takes place between the events of Saga of Old City and Artifact of Evil. I’m told that the style is comparable to Fritz Leiber’s Fafhrd and Grey Mouser stories (if not a straight up knock off) with Gord in the role of the Mouser and Chert as Fafhrd. Having never read Leiber’s work, I’ll take your word for it.

As typically happens with the Gord books, the cover art seems to be unrelated to the contents of the book. Oh well. You can’t judge a book by its cover, right?

Night Arrant isn’t a single narrative or one big quest like Artifact of Evil. It’s a series of episodic adventures, thinly connected when at all. The book contains nine fun-to-read, swashbuckling short stories about Gord’s misadventures in and around the City of Greyhawk. It reminds me of the type of D&D games my friends and I ran when we were kids and had time to play almost every day. As Dungeon Master, I’d have to come up with spontaneous adventures on a daily basis—usually off the cuff one-shot episodes scrapping with the locals around town.

Purists seeking the Gygaxian Greyhawk will find a treasure trove of Greyhawk lore in every story. It’s the kind of detail and color that you won’t get in the sourcebooks. Plenty of fuel to inspire your own games and a plenty of pages to enjoy immersed in the world’s greatest RPG realm. END_OF_DOCUMENT_TOKEN_TO_BE_REPLACED 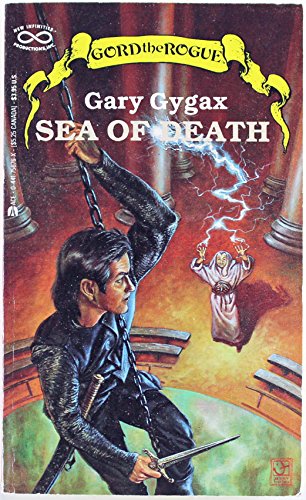 Sea of Death is the story of Gord’s quest across the Sea of Dust. It’s the third novel in the Gord books, but the first in the series to be released after Gary Gygax’s departure from TSR (and the first to actually bear the “Gord the Rogue” banner as a series identifier).

Published by New Infinities in 1987, this novel picks up some months after the previous installment and finds Gord in the Baklunish lands west of the Flanaess. He is on a mission to recover the second part of the three-part artifact known as the Theorpart, which will free the god Tharizdun from his aeons-long sleep and bring about the final victory of Evil over the multiverse. To assist him in this mission, he has been endowed with magical powers by the Demiurge (Basiliv, who in Gygax’s Greyhawk is the Mage of the Valley), and the Cat Lord, who favors the forces of Neutrality.

The second part of the artifact, known as the Second Key, is found in the City Out of Mind in the dangerous Sea of Dust. The map in the beginning of the book confirms that this is the same as the Forgotten City on the original Darlene map of the World of Greyhawk. END_OF_DOCUMENT_TOKEN_TO_BE_REPLACED

Harmonized with Greyhawk Wars; augmented and edited for Greyhawkstories.

Before the Malevolent Throne

If the stark city of Dorakaa was ugly and wicked, its palace was the nadir of such maleficence, and the reeking throne chamber its very pit. So tortuous its shapes, so horrific its decoration, so disgusting its every aspect, that few humans could remain sane within its confines. Men, and women too, were indeed therein, but of their sanity, who could speak?

The Eldritch Lord of Evil so possessed his servants and their every inclination that they scarce knew the bounds where their own will ended and his began. Twelve of these he counted among his most potent: The Boneheart. These he summoned now to his audience.

“Will you indeed take up to half my kingdom?” he muttered to himself as he waited the arrival of his thralls. Long had his jealous heart meditated on the power of Molag: an obstacle to his plans and an insult to his dignity. The time drew near to avenge himself and take back that which by rights belonged to him. “I will teach those pots of blashy piss the true meaning of hierarchy!” he snarled out loud as the first of his chosen ones began to arrive before him.

His servants sensed their master’s mood at once. Malign hatred hung in the air. It seemed to permeate the great, ghastly hall in layers of palpable evil. The closer one came to the throne of silver-set human bones, the stronger the hatred and attendant fear END_OF_DOCUMENT_TOKEN_TO_BE_REPLACED

Iuz’s greatest fear is not a paladin of Pelor or the Cudgel of Cuthbert or any heroes of good. He fears his mom teaming up with his girlfriend. In the Greyhawk novel Artifact of Evil, Gary Gygax narrates a comical encounter between Iuz, his mother Iggwilv, and his girlfriend Zuggtmoy. It starts when the dark lord’s orgasmic scrying device becomes a portal that lets the two of them into his private palace:

The oily liquid in the massive [scrying] pool erupted in a geyser that struck the ceiling almost twenty feet above its surface. As the droplets pattered down throughout the room, a pair of women appeared. Before Iuz’s startled gaze stood Iggwilv, his mother, and Zuggtmoy, Demoness Lady of Fungi. Between them, grasped by both, was the Second Key! END_OF_DOCUMENT_TOKEN_TO_BE_REPLACED

In Artifact of Evil, Gary Gygax summarizes an important chapter in the career of “Iggwilv, the Mother of Evil.” She races against a band of adventurers on a quest in the depths of the Temple of Elemental Evil. Iggwilv is there on a mission to win the loyalty of a powerful new ally: Zuggtmoy. The Fiend of Fungus, after all, is more-or-less her daughter-in-law.

Here’s how Gygax told the tale:

At the northern edge of the Kron Hills, where the fringe of the great Gnarley Forest sent no more of its briars and oaks toward the setting sun, stand the ruins of a large building. Once active, the place is now generally shunned, for another battle was fought near it and its builders slain or gone in defeat. The place is, of course, the Temple of Elemental Evil – its ruin, rather – as any local serf or peasant farm-boy from the neighborhood could tell you. Other than an occasional group of adventurous explorers seeking forgotten treasure, nobody goes to the temple. Bad, evil things haunt the place still. END_OF_DOCUMENT_TOKEN_TO_BE_REPLACED

Hot on the heels of my review of Gary Gygax‘s first novel, Saga of Old City, we come to the second in the series (and the last published by TSR), Artifact of Evil, published in 1986.

This book has a very different feel than its predecessor, even though the action takes place only a few months after the end of the first. Where Saga of Old City was episodic, with no real plot threading throughout it other than chronicling Gord’s early adventures, Artifact of Evil has a definite plot. The forces of Evil are searching for a powerful artifact that can be used to loose the evil god Tharizdun from his prison, thus bringing doom to the world unless they can be stopped. END_OF_DOCUMENT_TOKEN_TO_BE_REPLACED

Saga of the Old City: A Novel of Swordplay, Thievery, and Magic

Saga of Old City is the first in the series of novels and stories written by Gary Gygax, featuring his hero Gord. The book was released in 1985 as part of the last gasp of products written by Gygax right before his ouster from TSR.

Saga of Old City charts the early life of Gord, a beggar, thief, acrobat, and adventurer from the slums of Greyhawk’s Old City (hence the title). Interestingly, though, only the first part of the novel actually takes place in Old City, although there is a satisfying denouement that brings the hero back there.

Rather than presenting a single plot, the book is episodic, broken into several stories with connective tissue bridging them together:

This episodic nature really gives the book a feel like you’re reading an adventure straight from Gygax’s table. END_OF_DOCUMENT_TOKEN_TO_BE_REPLACED